Mexico’s Guatemalan refugees: where are they now?

How Guatemalan refugees found peace and prosperity through farming

Author :  FAO - Food and Agriculture Organization of the United Nations

Perched on gently rolling hills, San Lorenzo village in southern Mexico has been home to some 50 refugee families who fled Guatemala’s civil war.

The Mexican Commission for Aid to Refugees (COMAR) estimates that over 45,000 people fled to Mexico in the ‘80s, mainly from villages and cantons of Guatemala’s Huehuetenango and Quetzaltenango regions.

Nicolás Gómez Domingo, an indigenous chuj, was 11 when he crossed the border with his parents, four sisters and brothers. His wife, Emilia Felipe José, an indigenous Acatenca, was eight.

Emilia and her husband, Nicolás Gómez Domingo, working in their greenhouse (right) and feeding their pigs. ©Alex Webb/Magnum Photos for FAO.

Those were gruesome times. Times neither Emilia nor Nicolás can forget.

“We were camping in paddocks . Some of our relatives died because we were attacked even on the way…We slept in the trees, under the rain,” recalls Emilia, her dark eyes in constant motion, running this way and that as if filled with the same fear she must have felt 35 years ago.

The first years in Mexico were full of uncertainty, continues Nicolás.

This is where Emilia and Nicolás met. Both refugees, both learning to fit in. For years, they feared their traditional way of dressing, their language might give them away. They didn’t want to be found out and sent back to Guatemala.

Farmers working in a maize field framed with avocado plants in the village of San Lorenzo. The village is populated by refugees who fled Guatemala’s civil war in the ‘80s. ©Alex Webb/Magnum Photos for FAO.

From refugees to thriving farmers

A change happened when, in 2005, they were told they could participate in government programmes.

With the support of the Mexican Government, the Diocese of San Cristóbal and the UN Refugee Agency (UNHCR), the families of Emilia and Nicolás, along with 22 other Guatemalan families, bought 78 hectares of land.

Then, in 2011, they joined the “Strategic Food Security Project” (PESA), a project implemented by the government with support from FAO. 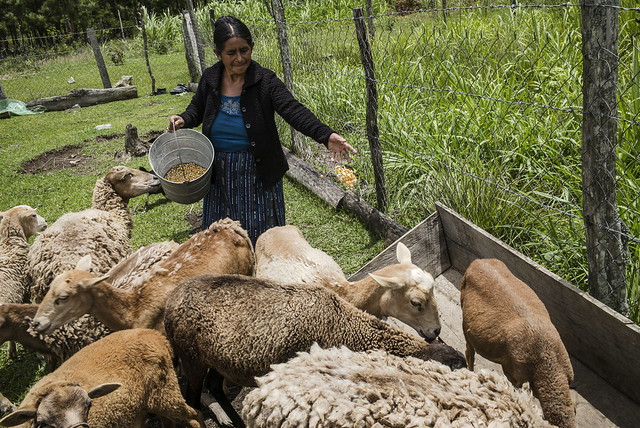 The project enabled Nicolás and Emilia to start rearing chickens, pigs, rabbits; grow vegetables and fruits; and be part of farmers’ cooperatives to better plan and sell their products.

“I have never imagined that I would get to work with the other women. Our lives have changed ,” says Emilia.

Emilia and Nicolás do most of the farm work together. But she looks more after the chickens and pigs, and tends to the avocado and beans. Nicolás is up early morning, every day, to take care of the lambs and cows, before joining his wife and the others in the corn and beans fields.

The farmers practice “milpa” agriculture, a form of agriculture common in Mesoamerica, which entails inter-cropping a variety of plants, such as corn, beans and avocadoes.

Their eldest son, Matías, who had migrated to the US in search for work, returned home once the project started, and joined his parents.

"There is no need to leave for work anymore. We can stay and build our country,” says Matías.

Find out more about FAO’s work in Mexico.

Is the planet approaching "peak fish"? Not so fast, study says

Forests and trees are key for a sustainable future

Protecting the right to a childhood

10 questions – How much do you know about forests and energy?

The state of food and agriculture 2016

The State of the World’s Forests 2016

The People’s Manual on the Guidelines on Governance of Land, Fisheries and Forests

The role of pulses in nutrition-sensitive agriculture

Freebee: How bees can help raise food security of 2 billion smallholders at no cost

PETROCARIBE: 10 years of struggle against hunger and poverty

Soils are endangered, but the degradation can be rolled back

A body of evidence: What climate change implies for global food security and trade

Lakes and rivers key to livelihoods of millions

Genetic diversity a hidden tool in coping with climate change

The State of Food Insecurity in the World 2014

FAO calls for increased vigilance and preparedness in neighboring countries

The multiple dimensions of food security

Quinoa, an Andean crop that can play a significant role in eradicating hunger

Food waste is a growing concern next to food losses

The State of Food Insecurity in the World 2012

Impacts of Bioenergy on Food Security

Ten proposals to safeguard the ocean

Forests and climate change in the Mediterranean

Potentially catastrophic climate impacts on food production over the long-term

Africa crop tool launched: Interactive 43-nation guide on what to plant, when and where

Crop biodiversity: use it or lose it - FAO launches 2nd State of the World’s Plant Genetic Resources for Food and Agriculture report

Food price volatility a major threat to food security, but no indication of a global food crisis

The safe use of wastewater in agriculture offers multiple benefits

World deforestation decreases, but remains alarming in many countries

Economic crisis is devastating for the world's hungry : 1.02 billion hungry people in 2009

One sixth of humanity undernourished - more than ever before

Agriculture more resilient to global crisis than other sectors

Virtual Water: How much water does it take to produce...?

Despite bumper 2008 harvests, high prices persist in many poor countries

"Food should be a national security issue" - Interview with M. Chipeta on the food crisis in Eastern Africa

Climate change will have strong impact on fisheries

Land degradation on the rise: one fourth of the world’s population affected, says new study

A major boost to preparations for the FAO Summit on food security: Brazilian President Lula confirms his presence

Opening of seed vault in Norway

The State of Agricultural Commodity Markets 2006

Agricultural heritage: legacy from the past, passport for the future
(Forum highlights importance of family agriculture for sustainable development)

New focus needed for Doha Round

World Congress on Communication for Development

FAO and the challenge of the Millennium Development Goals : The road ahead

The State of Food Insecurity in the World 2005

The digital divide continues to hinder development in rural areas

Africans meet to improve food safety on the continent

The Kyoto process: an additional opportunity for the poorest countries?

Education for rural people, a crucial step towards the Millennium Goals

Climate change could increase the number of hungry people

Afghanistan: 14 000 grain silos to be distributed to farmers

Worsening food situation in parts of the Sahel

The future of agriculture depends on biodiversity

Sustainable development in mountain regions: the path ahead

Wealth and poverty continue to coexist in Europe - Diouf

Wealth and poverty continue to coexist in Europe - Diouf

The challenge of sustainable mountain development

Treaty on biodiversity to become law

BSE controls in many countries are still not sufficient

FAO reports a setback in the war against hunger

Working together for an International Alliance against Hunger

Online scientific information on food and agriculture for poorest countries

$6 million project for one of the poorest regions in Afghanistan

Seeds and tools for nearly 2 million farmers in Angola

World agriculture: towards 2015/2030
13
SEARCH
Support GERM
In order to guaranty its independence and to continue its missions of public interest that we have been leading without interruption since the beginning of the year 2001, the GERM association has decided to launch a new collect donation campaign. Thanks to your help, the GERM will be able to continue carrying out its work of information, study, research, formation and mobilization of the scientific community and of the civil society on the great worldwide contemporary mutations.

Other items
where is published this article: